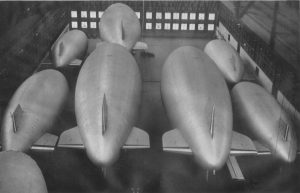 Noting the Axis submarine buildup, six copies of the only available modern airship prototype  –  the K-2  –  were ordered into production as WWII began in Europe. Two bases to be equipped with modern large steel hangars were laid out in South Weymouth, Mass., and Elizabeth City, N.C. Only a half-dozen K-type airships, all without submarine detection equipment, were available in the days after the Pearl Harbor attack.  They formed the basis for NAS Lakehurst New Jersey’s ZP-12, the first airship squadron in the Atlantic. A ragtag band of commandeered Goodyear advertizing blimps and former Army airships formed the first West Coast squadron, Moffett Field’s ZP-32.

Few in number but spread along several States’ coasts, the 425,000 ft3 of helium 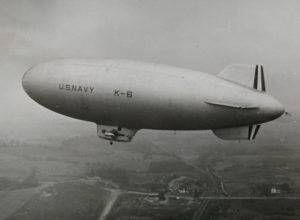 K-ships were repeatedly noted by German U-boats. The K-6’s depth charge attack on surfacing sub U-94 in March 1942 was the first air ASW action on the American coast, after which the U-boat turned for home. VADM C. E. Rosendahl researched this combat and the rest of war in his book US Navy Airships In WWII.

Radar and magnetic detection sets were fitted to the K-types slowly coming off the new production line, as both new bases formed squadrons, ZP-11 and ZP-14. Innovative airshipmen overcame scarcity to perform a variety of services from convoy escort to location of lost airplanes. At the height of Germany’s “battle of tonnage,” U-boats recorded several airship attacks; Navy Intelligence credited three with inflicting probable damage. On 3 JUN 42 the patrolling K-3’s crew witnessed a distant torpedo explosion; attacking, K-3 effectively immobilized the U-432, preventing further attacks on a convoy. 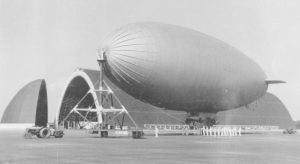 K-ships were first flown to, then later erected on the West Coast for Squadrons ZP-31, -32 and -33. Operating in a variety of weather and conditions, fatal accidents were few. (One commandeered Goodyear blimp, christened L-8, even returned without its crew, a mystery to this day.) 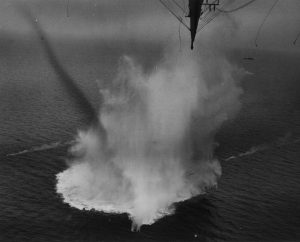 never stronger than a few dozen aloft in the Atlantic any given moment in 1943 as their new bases were completed, airships were logged by U-boats, recording several attacks. No merchantmen were sunk when an airship was in escort. Only one submariner was bold enough to launch a torpedo attack (unsuccessfully) after spotting “active airship protection.” Counterattacking in that 25 AUG 43 encounter, the K-34 drove off the U-107. Only the K-74 was shot down as it attacked and damaged the surfaced U-134, after which the sub turned for home.

Smoke floats were used to mark a MAD target for depth charge attack. The K-ship’s four 350-lb. bombs were usually set for 50 feet and had a small “kill” radius. Previously classified combats and details of weapons used are part of R. G. Van Treuren’s Airships vs. Submarines.

NAS Richmond’s three-hangar complex hosted ZP-21, the largest LTA squadron. What few motion pictures of this base have been found are included in the DVD The Blimp Goes to War… Again.

Airshipmen established a base on Trinidad with ZP-51 and crossed the Equator to Brazil, with squadrons ZP-41 and -42. Far south in Santa Cruz, the former German Hindenburg hangar was commandeered for K-ship maintenance. 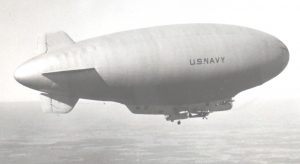 Experiments with M-1 included carrying a spotter plane which was later modified to be a remote-control weapon.

Goodyear’s first modern pressure airship, the M-type, had to be designed and constructed out of K-ship assembly line allotments. The 625,000 ft3 M-1 had greatly improved performance, but materials allotted airship production were never raised above Priority Four. Allotments ran out at 135 K-types and only 4 M-types.

Deployed to the Mediterranean in 1944, crews made the first non-rigid airship crossing of the Atlantic via the Azores, then later via Bermuda. Squadron ZP-14 established a nighttime magnetic detection barrier across the Straits of Gibraltar, which no U-boat penetrated. The LTA sailors earned praise in their mine-hunting work across the central Med. Establishing a maintenance base in the south of France, the former German Zeppelin hangars at Cures were commandeered. Individual K-type airship records are detailed in James Shock’s US Navy Airships.

Stateside, resourceful airshipmen developed and employed airborne rescue equipment, demonstrated carrier operations and refined radio navigation. Establishing records for continuous years of all-weather operations, the dependable K-type airships’ safety record was the envy of airplane ASW as they preformed some two dozen types of additional tasks. Topside rigging and even engine changes were completed as the ships swung on the masts at remote sites.

In response to the new threat of radio-silent U-boats approaching to launch V-1 “buzz bombs,” K-ships were finally equipped with advanced ASW equipment very late in the war. K-ship crews met the last U-boat onslaught with sono-bouys and the homing torpedo. Records suggest the K-72 used them successfully against a sub on 18 APR 45. The final hits on the last U-boat in American waters were delivered in May by K-ships following surface units damaging themselves with their own depth charges.

Though all but the one combat was classified for 50 years, WWII re-established the record of the airship as the submarine’s only natural enemy.