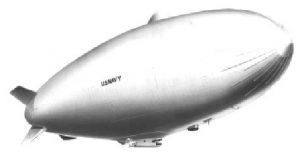 Following the late 1945 return of Mediterranean minehunters ZP-14,  US Navy LTA organizations were quick to “deflate, crate and first out the gate.”  From more than 125 airships in 15 squadrons patrolling roughly 3 million square miles off the coasts of 4 continents, by the end of 1946 there were only 2 squadrons remaining. Airship Squadron 31 (ZP-31) based at NAS Santa Ana, CA was designated ZP-1 and maintained a small detachment at NAS Moffett Field. Subsequently, by August, 1947 squadron ZP-1 was transferred to NAF Weeksville, NC, thus ending all LTA operations on the west coast. Airship Squadron 12 (ZP-12) stationed at NAS Lakehurst, NJ became ZP-2 with a detachment at NAS Key West, FL. Their four M-type airships were 287 ft. long and 85.1 ft. in diameter enclosing 650,000 cubic feet and had operational flight endurance of over 100 hours. Enlarged to 675,000 ft3 , XM-1 set a 170-hour record in 1946.

The mighty “Mike” (right) pioneered improved ASW and AEW, with some experiments remaining classified to this day.

By 1948 the Navy showed renewed interest in the unique and long range capabilities of airships, issuing a call for heavier-than-air (HTA) aviators to transition to LTA operations. Eighteen officers reported for duty to the Airship Training Unit (ZTU) at NAS Lakehurst. 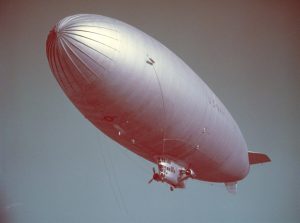 The venerable K-type airship was upgraded to “2K” configuration (photo) with improvements such as in-flight refueling, more sophisticated ASW radar, magnetic detection equipment, sonar capability, electric propellers with reversible pitch, and equipment allowing communication between surface vessels and other aircraft. Envelopes exceeded half a million cubic feet to lift the new electronics and their larger generators as exercises with submarines showed ASW effectiveness was greatly enhanced. 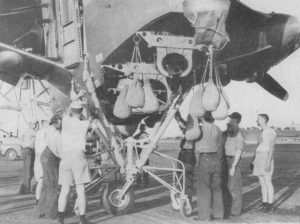 In ZP-3K configuration cars were even more heavily modified to tow a sonar “fish” (right, shown with emergency gear test) and given additional electrical capacity.

An oversize sonar-fish towing winch mounted aft was also used for re-arming and re-manning. ZS2G-1’s landing gear was designed for steel carrier decks, but replenishment could be taken from most any fleet unit. Its high-tech design proved accident-prone, but one ZS2G-1 airship was retained into 1961 as a “Flying Wind Tunnel,” investigating low speed aerodynamics.

Specifications of all postwar mods and models as well as records of each individual airship are included in James Shock’s US Navy Airships.

A separate design team created the “Nan” ship. Prototype N-1 featured engines located inside the car, connected by a dual in/out transmission box to the propellers. This feature not only eased in-flight maintenance, but also allowed for efficient one engine – two propeller operation below 40 knots. Living quarters were provided for the crew on an upper deck.

The production ZPG-2 (above) with “X” tail and control surfaces boasted a length of 343 ft., 75.4 ft. diameter for capacity of 975,000 ft3 . Tricycle landing gear could be electrically controlled, with the nose gear being raised 40 degrees to allow for mast mounted movement.

No longer needing a flattop carrier, the ZPG-2 refueled from fleet oilers. It carried its own relief crew, which enjoyed berths and galley in the car’s upper deck. One factory-fresh ZPG-2 quickly broke the M-ship endurance record, remaining aloft for 200 hours. Another flew above the Arctic Circle, taking supplies to a remote ice station. In the spring of 1960 “Operation Whole Gale” tested ZPG-2s to maintain an ASW barrier 24/7 over two months in some of the worst winter weather in years, sometimes grounding all HTA. No sub got through as the exercise logged ever longer endurance; one ZPG-2 held ASW station for 95.5 hours, a record that compares rather favorably with today’s ASW airplanes. (A first-person account from the command pilot is included in The Airship Experience.)

In another demonstration a ZPG-2 departed from NAS S. Weymouth and flew to Europe, Africa, and then setting a record of 8,216 miles in 264 hrs.14 mins. by the time it landed at NAS Key West. Breaking the 1929 rigid Graf Zeppelin’s record, it’s a time-distance mark that stands to this day.

In 1956 adding more helium capacity and additional radar created the ZPG-2W (above), becoming the core of Airship Airborne Early Warning Squadron 1 (ZW-1). The ZPG-2W sported a height-finder radar located on top of the envelope, accessible through a ladder-equipped access shaft inside. In the final -2W, a low frequency radar antenna, 33 ft. wide and 8 ft. tall, was installed inside the envelope.

With Navy leadership emphasizing the flattop ship, three airship squadrons would be decommissioned, leaving FAW-1 with only ZP-3 and Airship Early Warning Squadron 1 (ZW-1) at Lakehurst, as other stations were mothballed. 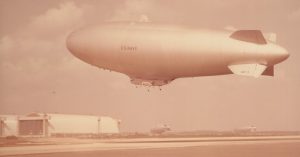 In 1958 the US Navy took delivery of the ZPG-3W (above), the largest non-rigid airship ever constructed, specifically designed for AEW.  It was 403 ft. long, 85.1 ft. dia. and, depending on envelope material, had a volume of 1,509,000 to 1,544,000 ft3.  A 40 ft. wide radar antenna rotated inside the envelope, and a height finder radar dome was mounted on top.  The four ZPG-3Ws delivered to ZW-1 at NAS Lakehurst were part of the US Airborne Early Defense system. Their on-station endurance capabilities compared favorably to five USAF Super Constellations in rotation. Any Fleet unit could drop a floating bag of fuel for -3W retrieval on station. When filling in for ground based air control stations, operators noted enhanced airplane sighting capability.

All of the known quality motion pictures of postwar K-ship modifications and well as “4K,” “5K” and all three “Nan” models are included in the DVD “Airships Fight A Cold War.”

Also seen as incompatible with rather than enhancing the carrier-based Navy, on 31 October 1961, ZW-1 was decommissioned, along with ZP-3 and FAW-1. There was a short period of boundary layer experiments with the remaining ZS2G-1 and “Flying Wind Tunnel” experimental flights with the last ZPG-2. The Navy passed on the opportunity to upgrade airships with stern propulsion and other improvements to tackle the new nuclear-powered submarines, ending 46 years’ LTA employment.

Decades of experiments, design studies and actual prototypes finally found the Navy leasing a new airship in 2007. The MZ-3A returned LTA to R & D and AEW, assisting the Coast Guard in a 2010 Gulf oil spill. The airship finished out its contract carrying this enormous antenna in 2016.