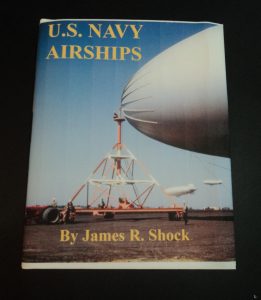 Signed by the author

Here in one volume are the individual histories of every US Navy airship, from DN-1 (A-1) through the MZ-3A of 2007.

Part One covers the first hydrogen-filled non-rigids, from the unsuccessful DN-1 through the airplane-fuselage ‘B’ ships and the record-breaking ’C’ ships. The Army-Navy ‘D’ types, E-, F-, H-, and J– types are detailed by individual serial number.

Part Two examines each British, French and Italian airship purchase by the US Navy following World War One, including the only Italian ship to be given a US Navy designation, O-1.

Part Three offers histories of the great rigid dirigibles, ZR-1, the ill-fated ZR-2, the successful ZR-3, and the flying aircraft carriers, the ZRS-4 and –5.

Part Four includes the inter-war years non-rigids K-1, G-1, the L-series, and the newly designed K-2. As World War Two loomed, the Navy’s late decision to mass-produce airships found only a handful of  blimps available to meet the submarine threat when America entered the war.

Postwar airships are examined in Part Six, including the modifications to K ships, the all new ‘4K’ and ‘5K,’ the record setting Nan ships, and the largest blimps ever built, the radar-picket ZPG-3W. The efforts to return to LTA in the 1980s and 1990s closes with the Navy’s most recent airship, the MZ-3A.

The Hardcover Edition also includes a complete listing of all pilots qualified in LTA with details from US Navy records.

Signed by the author