The first step for any University to offer a course in airship technology would be printing a textbook on the subject. In the year 2000, Prof. Dr.-Ing. Berthold Knauer proposed and financed the production of comprehensive textbook of Lighter-Than-Air (LTA) technology. His co-chair of the LTA-Committee, German Aerospace Association (DGLR), Dipl.-Phys. Jüergen K. Bock, co-authored the book, which was mainly composed and edited by members of the Institute for Aeronautics and Lightweight Construction. 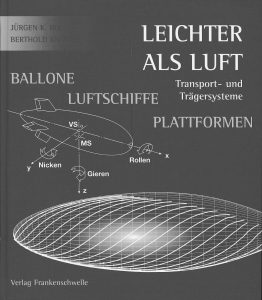 Published in the German language in 2003 as LEICHTER ALS LUFT.TRANSPORT- UND TRAGERSYSTEME. BALLONE, LUFTSCHIFFE, PLATTFORMEN, the book was a hardcover edition totaling 504 pages. (In January 2019 Amazon.com listed used copies for $222.00)

NOON BALLOON editor Richard Van Treuren proposed LEICHTER ALS LUFT be translated into an English language version.  Over these last ten years the translation was slowly accomplished via a few of the original authors and other volunteers. Simultaneously with the new layout, the Editor sought to expand Charles Mills’ real-world experience with more articles by Naval Airship Association veteran members, as well as papers presented by Airship Association and AIAA LTA TC members. Van Treuren also incorporated much of the lessons learned, and historical and technological high points, gleaned from more than a decade of NOON BALLOON issues and other book and video publishing. These and a host of original pages were enhanced with new photos and illustrations, many which have never been published elsewhere.

LIGHTER-THAN-AIR TRANSPORT AND CARRIER SYSTEMS is a complete encyclopedia of all things LTA – past, present and future. CP Hall reviewed the book and you can read the review here.